This afternoon, we were asked to assist Oceanport Fire Dept. at a house fire on Branchport Ave. Members responded with 4590 and 4585, and our primary mission was cutting holes in the roof to provide v...
➜
Truck Fire 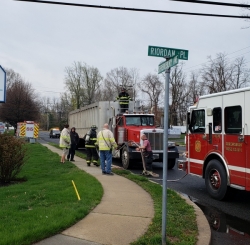 This morning members responded to a call for a truck fire, a tractor trailer carrying mulch was stopped by the SPD with smoking coming from the trailer. Upon arrival units found a small fire in the mu...
➜
Mutual Aid Eatontown 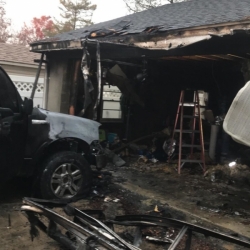 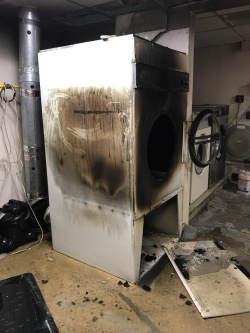 This evening, members responded to a fire at The Brandywine on Meridian Way. There was a fire in one of the dryers in the basement. The fire was quickly extinguished by the sprinklers and our firefigh...
➜
Department History

Frank B. Lawes Sr. chaired the organizational meeting of the fire company held in Library Hall on November 10, 1908.  One week later Benjamin Lane was elected as the first Chief of the Shrewsbury Hose Co. #1.  On December 3 1908, with twenty-one men in attendance, it was voted to close the charter.  Michael McGarity was elected the first President on December 17, 1908, under the incorporated name of Shrewsbury Hose Co. #1.

Serving as charter members of Shrewsbury Hose Co. #1 were:

The company’s first vehicle was a hose cart, which was pulled by hand.  It was purchased from White Plains, New York’s Fire Department for $75.00.  It had a capacity of 75 feet of hose.  This was housed in an old building adjacent to Library Hall.  Badges were purchased and distributed to the active members at a meeting on March 4, 1909.

November 4, 1909 marked the first meeting in the new firehouse.  Fair Haven Fire Company donated a “gong” to Shrewsbury for alerting firemen to calls.  A bell, donated by the Presbyterian Church, then at the corner of Wallace and Broad Street, Red Bank, was installed.  The cost of construction of a wooden tower and installation of the bell was paid for by Dr. Ernest Fahnstock.  The continued growth of the town necessitated the company to purchase a ladder cart from John Cerham for $60.00.

On April 16, 1915 the Shrewsbury firemen purchased a Pope Hartford automobile from H.L. Zobel for $450.00.  The body, 26 inches deep and 10 feet long with a rear step and ladder racks, brackets for lamps and extinguishers, was constructed by A.L. Davidson for $250.00.

August 8, 1915 saw the expansion of the firehouse, a small addition was added to the front of the building at a cost of $1,480.00.  Records fail to indicate the size of the addition.

In the next two years, a 60 foot bell tower was erected by Charles Hoborough for $366.00 and an American LaFrance 500-gallon pumper was purchased.  This vehicle was equipped with hard rubber tires and was right hand drive.  This truck served the borough through November 1930, when an additional hose truck was purchased from the Neptune Fire Co. for $275.00.  The initial fire siren was installed in 1931.  The company received another American LaFrance 500-gallon pumper replacing the old one.  This pumper, also with right hand drive, was equipped with air filled rubber tires and purchased for $6,625.00.

By December 1942 the effects of World War II had already reached deeply into this little community, and were noticeable in our fire company.  The late Frank J. Lane, son of the first Fire Chief, Benjamin Lane, served as Fire Chief in 1946.  All funds that were not necessary to operate the fire company were turned into War Savings Bonds.  At that time many of the firemen returned home, now veterans of their country and without any hesitation resumed their duties in the fire company.

On October 16, 1947 a Seagrave Quad 600 gpm pumper was purchased for $10,400.00.  This truck served as a pumper, ladder and booster truck, and represented the first purchase of modern, up-to-date firefighting equipment.

The Ladies Auxiliary of the fire company was organized on October 28, 1947, and has continued to be active through present day.  The first President of the Ladies Auxiliary was Mrs. Rudolph Barg, Vice President, Mrs. Carmen Calandriello, Secretary, Mrs. John Poole and Treasurer, Mrs. John Parker.  The initial membership consisted of:

The Auxiliary has served the firefighters in many ways including fund raising, support at lengthy fires and with their own fund raising efforts.  It is of note, that Mrs. Ruth Cooney is still an active member today.

In 1956 a Ward LaFrance 750-gpm engine was purchased under the guidance of Chief Frank W. Curley and was in service until the late 1980’s.  In that same year the firemen organized the first annual Christmas celebration at the firehouse with George H. Lange Sr. playing Santa Claus.  Other activities such as fire prevention week, open house and fundraising dinners soon followed.

A field day competition was proposed to the fire company at the March 1958 meeting, which consisted of firematic events between local fire companies.  The first field day was held August 16, 1958, with the Shrewsbury, Red Bank, Little Silver, Eatontown, Oceanport, River Plaza and Fair Haven fire companies competing.  Shrewsbury excelled by winning the overall championship for that year and many more to follow.  The fire company participates in field day competitions to this day and still wins many events.

Early in 1958, a meeting was held to discuss the construction of a new firehouse adjacent to the old building on Broad Street.  Several sites were also investigated as possible locations mostly on Broad St, but one on Sycamore and one on Patterson Avenue were also discussed.  On June 9, 1959, it was proposed to purchase the Marx/Farrell property, the site of the present firehouse.  The land however was very low and several loads of fill, donated by M. Stavola, were transported to the property by energetic firemen.  The building had to be supported by pilings due to the consistency of the soil and the first pilings were driven by December of the same year. It was determined that 59 pilings were needed to support the building.  By this time fire company funds were almost completely depleted by the purchase of the property.  In order to fund the construction the company assumed a mortgage from the Merchants Trust Co.

Guided by J. Grover Carter, then President and Chief Louis Longo, the contract was awarded to the Rockefeller Construction Company, of Atlantic Highlands.  A building permit was donated by the Borough.  F.C. Hurley of Neptune submitted a bid of $500.00 for demolition of the old firehouse.  The architect was Gerard A. Barber of Shrewsbury who charged $2,718.00 for his services.  The cost of the new building was $58,410.00.  Oscar Newman was chairman of the cornerstone laying committee along with Frank Lane, Frank Dancey, Dr. Ensley White, James Bly, and George Lange Sr.

After numerous delays, the firehouse construction was completed, and the fire equipment moved into the new building on Wednesday, June 28, 1961.  The new firehouse building was 50x80 feet and consisted of three engine bays (33x50) and a meeting room (20x50). Engineer George “Pop” Lange, Sr. backed the Ward LaFrance in for the first time.  The first meeting in the new firehouse was held July 11, 1961.  Cornerstone ceremonies for the new firehouse were held July 23, 1961 with Congressman James C. Auchincloss furnishing a Capitol Flag to be flown for the ceremony.  This building stood until 2005 when it was demolished to make way for the current firehouse.

The fire company found the new building inadequate for all functions.  In 1971 plans were initiated to construct a one story executive building directly behind the firehouse.  A permit was issued April 11, 1972.  Albert Hancher, chairman of the board of trustees distributed plans and specifications on June 20, 1972 and under the guidance of President, Frank Lane, a building committee was appointed consisting of trustees Sam “Lightening” Yorg, and Leslie Stout.  The building became affectionately known as “The Shack in the Back.”

In October 1973, a new Ford utility and Rescue vehicle was purchased to replace the Chevrolet step van.  Delivery of this apparatus was made in February 1974.  In 1977 the fire company received delivery of a Hahn 1500 gpm Engine, which was the first diesel powered vehicle purchased by the fire company.

1987 saw the purchase of a Hahn 1500 gpm pumper.  This apparatus carries 1,000 gallons of water, a full complement of hose and ground ladders.  This piece was given the number 4577.  A new ladder truck was purchased in 1991 to replace the 1962 GMC quint.  This unit, a 1991 Grumman Aerial Cat, has a 95-foot ladder, a full complement of ground ladders, a 1500 gpm pump and a 200-gallon water tank and is still in service.  This apparatus is assigned number 4590.  In 2000 a new pumper was purchased to replace the 1977 Hahn, which was donated to the Monmouth County Fire Academy.  This unit, a 2000 S&S rescue/pumper is equipped with a 2000 gpm pump, a 750-gallon water tank, a full complement of hose and ground ladders.  This unit also carries the Jaws of Life and has a 20 foot telescoping light tower and a 25 kw generator.  Engine 4576 was put into service in early 2001.  The truck committee for Engine 4576 consisted of Edward Magenheimer, Ralph Latham II, Peter Gibson, Robert Wentway, Peter Kanenbley, and David Reed. 2013 saw the purchase of two new pieces of equipment Engine 4575 was commissioned to replace the 1987 Hahn (4577) and Rescue 4585 was commissioned to replace the old Rescue (4586), both pieces are full equipped with all the necessary tools for modern day firefighting.

In 2004 a building committee was formed to replace the firehouse built in 1961.  An architect was hired and specs were drawn and sent out for bid.  The contract was awarded to BurMarc Construction from Ocean Township.  In 2005 the old firehouse and executive building were demolished and construction started on the new building.  The current firehouse has four engine bays, two of which are double deep to house all the equipment with a little room to grow.  There is also a state of the art kitchen, meeting room, executive offices and a member’s room.  This building was completed in late 2006.  The apparatus was backed into the building on November 1, 2006 simultaneously by Chief, Edward Magenheimer (4590), 1st Asst Chief, Peter Gibson (4577), 2nd Asst. Chief, Robert Wentway (4576), and Chief Engineer, Ralph Latham II (4586).

Today there are over 40 active members of the Shrewsbury Hose Co. #1.  The current officers of the department are:

All firefighters are trained to the highest standards at the Monmouth County Fire Academy, New Jersey State Fire College and the National Fire Academy.

Throughout the over 109 years of its existence, over 400 members have unselfishly served our community as volunteers.  During these years, a deeply rooted tradition and heritage has been established.  This has been noticeable by the number of father and son combinations seen during the fighting of fires, bingo, fund raising, outdoor picnics, and other community events.  Some of the father and son/family teams of the past and present include the Marx, Reynolds, Yorg, Sagurton, Lane, Bly, Forrar, Dancey, Clark, Borden, Lang, Parker, Scott, O’Brien, Wentway, Latham, Gibson, Merris and Neis families.

The membership of the Shrewsbury Hose Co. #1 continues to pledge serving the residents and business of Shrewsbury in a professional manner and instituting the most up-to-date methods required in fire protection while protecting the lives and property of every resident and business.

Donations are always accepted and always appreciated. Click HERE to make a donation

This site has been viewed 44,877 times.
Calls
News
Events
Pictures
Apparatus
Maintained by the members and staff of Shrewsbury Hose Co. No. 1. Designated trademarks and brands are the property of their respective owners. Copyright © 2006-2022. YourFirstDue Inc. All Rights Reserved. Content on this web site is supplied by Shrewsbury Hose Co. No. 1. YourFirstDue Inc. cannot be held responsible or liable for any content, text, pictures, or any other media found on this web site.
Management login
Powered by

YourFirstDue.com
Websites for Fire and EMS
© 2022 Shrewsbury Hose Co. No. 1